The Truth Shall Make You Odd

Reflections (sometimes odd) on the life of faith

A year ago, the great city of Manchester was rocked by a dreadful terrorist attack, which killed 22 and injured 116. These were innocent people, many of whom were children, who had come together to enjoy a concert by Ariana Grande. A week later, I found myself in Greater Manchester, fulfilling a preaching invitation from my dear friend Fr David Warner, who is Vicar of the parish of Mossley. On the anniversary of the attack, here are the words I spoke.

Following the 2015 attacks in Paris, a video went viral on social media. It was a video of a small boy named Brandon and his father Angel in conversation at one of the bombing sites. A reporter asked little Brandon, “Do you understand?” This is how the conversation went:

Brandon: “Yes, because they’re really really mean. Bad guys are not very nice. And we have to be really careful because we will have to change houses.

Angel: “Yes, but there are bad guys everywhere. “

Brandon: “They have guns, they can shoot us because they’re really really mean daddy.”

Angel:  “It’s OK, they might have guns but we have flowers.”

Brandon: “But flowers don’t do anything…”

Angel: “Of course they do, look, everyone is putting flowers down. It’s to fight against the guns.”

Brandon: “It’s to protect? And the candles too?”

Angel: “It’s to remember the people who have gone.”

Brandon: “The flowers and the candles are here to protect us.”

Reporter: “Do you feel better now?”

If there’s one thing I have come to know more deeply in these past days, it is that Manchester has flowers. As one man with a sick and twisted ideology brought death and destruction to many hundreds of people, an entire city, this Manchester, this great Greater Manchester responded in the only way it knows how:

A J Singh, a Sikh taxi driver stuck a piece of A4 paper in the rear window of his cab, which read: “Free taxi if needed.” He said, “I’ve had people who needed to find loved ones, I’ve dropped them off to the hospital, they’re not had any money, they’ve been stranded.”

Many people threw the doors of their homes wide open to those who needed somewhere to stay in the immediate aftermath. Twitter was flooded with offers like that of James Plowright and Sophie Turner: 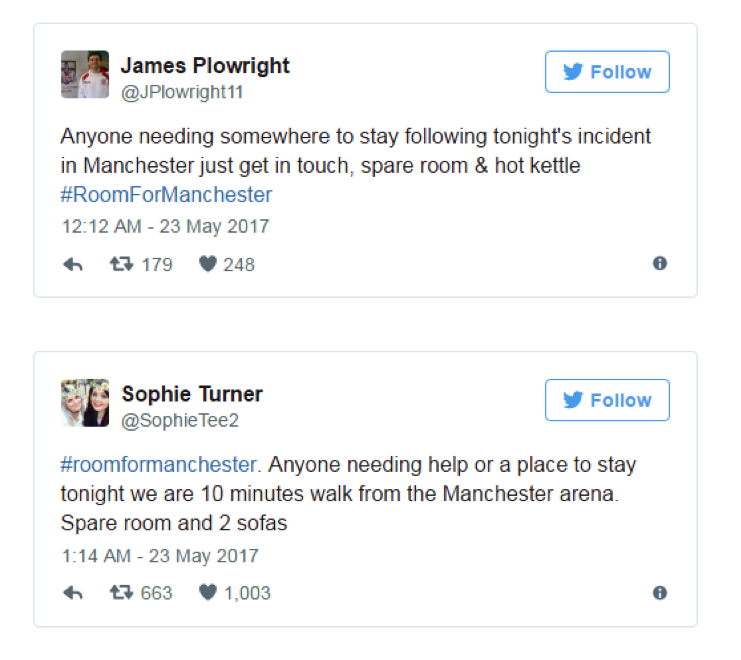 Long queues formed outside blood donor centres all over Manchester; people literally giving of themselves to help those whose bodies are broken. One donor, Dr Hussain Alsaffar said, “We’re here to give solidary with our fellow citizens and we’re here to save lives.”

Rabbi Shneur Cohen was pictured delivering coffees and pastries to officers outside the Arena and said that the city will come together.

A young boy stood in Albert Square with a simple sign, which read: “Free hugs.”

Today, on this first Sunday after the Ascension of Christ into heaven, we find ourselves in a liminal place, stuck between Christ’s departure from us and the arrival of the Holy Spirit at Pentecost. You can imagine the grief of the disciples as they endured a second leaving of Jesus, you can imagine their worry about what they do now that Jesus isn’t there to tell them, you can imagine their anxiety about what the future holds. You can understand their question which we heard at the beginning of our reading from Acts: “Lord, is this the time when you will restore the kingdom of Israel?”

This liminal place between Ascension and Pentecost speaks so powerfully to where we are as a community in Greater Manchester as we stand between the horror of last week and what feels like a very uncertain future. Perhaps we feel that Jesus isn’t with us, perhaps we feel confused, perhaps we feel helpless and we find ourselves, like the men of Galilee, looking up to heaven, praying the question: “Lord, is this the time when you will restore the kingdom?”

At Ascension, as we gaze up to heaven and watch Jesus disappear from our presence, we hear the voices of the two men robed in white saying, “Why do you stand looking up towards heaven?” It’s almost as if they’re saying, “Don’t just stand there – do something.” That, my friends, is what Ascension is all about: not just standing here, but doing something.

In our Gospel reading this morning, we are onlookers of a beautiful and intimate moment of prayer between Jesus and God his Father. He is contemplating his death as it draws nearer and he prays, “Now they know that everything you have given me is from you; for the words that you gave to me I have given to them…” Over the years, the disciples had followed Jesus around, heard his teachings, seen his work and gradually come to understand that Jesus was giving them an example of how to live and how to love. When the law demanded that someone be cast out, Jesus welcomed them in; when the law said that someone was unclean, Jesus touched them; when the law condemned someone, Jesus forgave them; when the law demanded blood, Jesus said, “Have mine and then not a drop more.” And when it looks as through the forces of darkness have won, we gaze into the empty tomb and come to know that love wins. That morning, when Mary went to the tomb and mistook Jesus for the gardener, she discovered that they may have had nails but Jesus had flowers.

Our Gospel reading this morning teaches us that the glory of God is to be found not in exerting our will over others or worse, doing them harm, for that is human glory; instead, it is to be found in Jesus’ unconditional, self-giving love which is able to conquer even death. That’s what the disciples had come to know, that’s what Jesus was talking about when be prayed, “…the words that you gave to me I have given to them.” Then, when Jesus thinks that they’ve got it, he says, “I’m going now, but remember: the world may have nails, but we have flowers. Go and give the world flowers.”

The Ascension is the feast of the divine absence: Jesus is no longer here, he is in heaven, and we are left to follow his example of unconditional, self-giving love; to continue the work that he began of giving the world flowers.

The people who perpetrated this week’s atrocities have a twisted view that they glorify the god they’ve made in their own image, by claiming the lives of others, but we, with our sisters and brothers from all the faiths, say we glorify our God by giving of ourselves to those in deepest need because that is the example we have been given and my God, Greater Manchester has lived up to its name by doing just that in these days.

As we chart these days of Ascension we, like the disciples, might feel very keenly the absence of Jesus in the brokenness of our world and whilst that might be painful it is also right, because it is only in this time of absence that we come to understand that it is now up to us and we need to stop gazing up to heaven and crack on with the work we have been called to.

They might have guns, but we have flowers. Let’s go and give them.

One thought on “They might have guns, but we have flowers.”

© Craig John Huxley-Jones and www.thetruthshallmakeyouodd.com 2018. Unauthorized use and/or duplication of this material without express and written permission from this site’s author and/or owner is strictly prohibited. Excerpts and links may be used, provided that full and clear credit is given to Craig John Huxley-Jones and www.thetruthshallmakeyouodd.com with appropriate and specific direction to the original content.